The Hampden Cup is an annual event contested by Members of Royal Sydney and The Australian Golf Club’s, the venue alternating between the two Club’s each year. Presented in 1897 by the Viscount Hampden, Governor of New South Wales, the Trophy was until 1902 the Cup for the Championship of New South Wales. It is now a par handicap event played over 36 holes on one day.

The 2018 event was held at The Australian Golf Club on Saturday, 19 May and was played from the Medal Course (Blue Tees) in pristine weather conditions.

Robert Trotter (AGC, handicap 7) and Harry Cook (RSGC, handicap 13) were the early leaders after round 1, each recording +2 nett after 18-holes. Ray Balcomb (AGC) lead the scratch division with a round 1 scratch score of -2 gross. After a short break for lunch players commenced their second round.

Ronald Ross (RSGC, handicap 15) was the nett winner of round 2 recording the low round of the day with a score of +3 nett. Ray Balcomb pressed on with an even par second round to win the overall scratch division by 9 shots, recording -2 gross for 36-holes.

Harry Cook matched his round 1 score of +2 nett in the afternoon and was subsequently crowned the Hampden Cup Champion for 2018 with a nett score total of +4, winning by 4 shots. Today was Harry’s first visit to The Australian Golf Club which will no doubt be a memorable one. 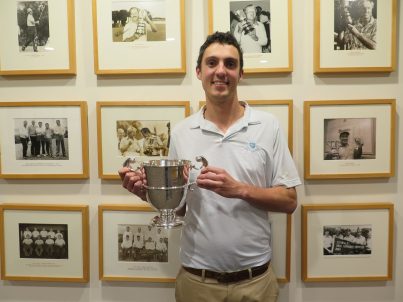