A special congratulations goes out to Geoff Everett who remarkably broke his age by 10 shots on Wednesday, 24 November 2021 at The Australian Golf Club. Geoff, aged 86, played the Club Course in 76 strokes which converted to a 45 point stableford total with his Daily Handicap of 13 in the Wednesday men’s competition.

Geoff, who is a 5-time Club Senior Champion at AGC, said he has broken his age on a few occasions but this was by far the biggest margin.

The round consisted of two birdies on the 4th & 11th, along with two bogies and two double-bogies to sign for a 4-over par round of 76 strokes gross.

Geoff has been a Member of The Australian Golf Club for over 40 years and has had a celebrated amateur golfing career. He qualified for The Australian Open tournament on a number of occasions, represented NSW & Australia, and won the NSW Foursomes Championship five times.

See Geoff in action today as he takes on Michel Bouskila in the final of the AJ Chown ‘B’ Grade Championship. 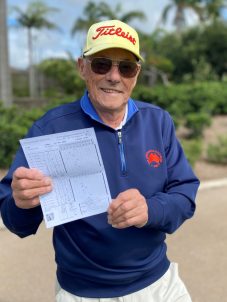 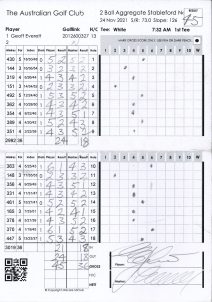